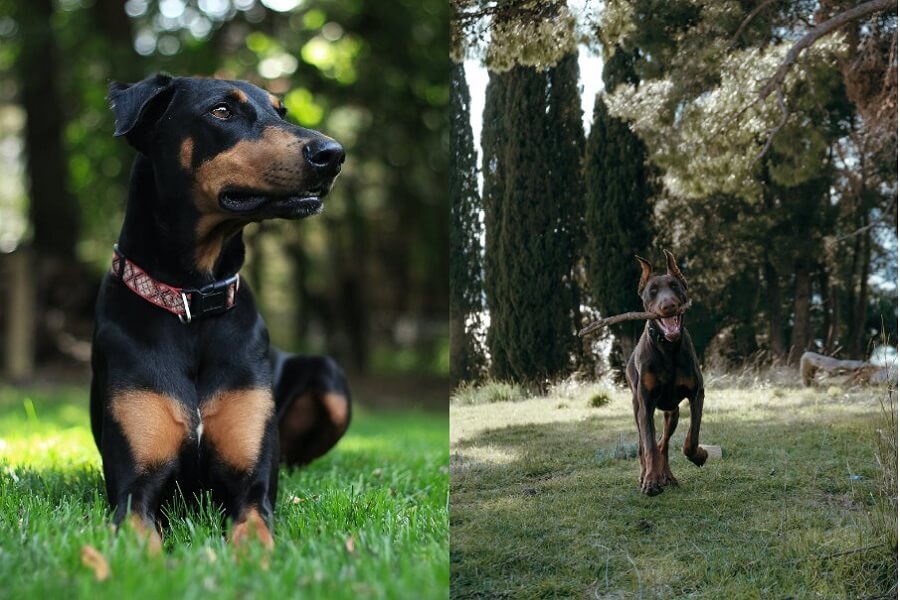 Comparing the Doberman Pinscher and the German Pinscher, both breeds present many similarities in their physical characteristics and meet the standard for a Pinscher breed. There are many notable differences worth considering before you choose which pet is best for your family.

The History of the German Pinscher and the Doberman Breeds

While the two breeds are often seen as closely related, they are distant, with different origins and histories. The German Pinscher breed originated in the 1800s when it was associated closely with another dog breed, the Standard Schnauzer. Since their first appearance in the nineteenth century, German Pinschers were not as widely bred until the mid-1950s, when they were reintroduced through crossbreeding.

German Pinschers were bred to improve the breed’s temperament, increase the dog’s hunting skills for small prey, and other preferable characteristics. The breed was named after Louis Dobermann, who first created the breed and was a local dog keeper who wanted to design a guard dog that would be ideal for providing security.

The Doberman Pinscher is considered a younger dog breed and one of the original designer dogs, as it consists of many other breeds and many of their characteristics, including the Rottweiler, Manchester Terrier, German Pinscher, Greyhound, German Shepherd, Gordon Setter, and the Beauceron.

Initially, both the Doberman and German Pinscher were smaller dogs, though they have since grown in size to work effectively as war dogs, in police services, as guide dogs, and on search and rescue operations. Both breeds make excellent family dogs and companions.

Physical Characteristics of the Doberman and German Pinscher

The German Pinscher and Doberman are considered medium in size. Dobermans typically range in height between 26 to 28 inches for males and between 24 and 26 inches for females. Dobermans have a sleek, slender body type and a strong, muscular form that’s compact. They come in a variety of colors, with a short coat in black, red, blue, or fawn, with rust markings.

While this dog breed’s appearance is similar to the German Shepherd dog, you’ll find they have a more sleek, athletic build that allows them to run fast and efficiently. They work well as patrol dogs and react quickly when they sense danger.

The German Pinscher is more miniature in size than the Doberman and is often referred to as the “middle” Pinscher, as it falls between 17 and 20 inches in this mid-range height. It’s often compared to the MinPin (Miniature Pinscher) and Standard Schnauzer.

Like the Doberman, the German Pinscher has a sleek body shape and a shiny fur coat that’s easy to groom. This Pinscher breed comes in red, fawn, black, and blue coat colors. They are strong, muscular, and have long, wedge-shaped heads with dark eyes.

Doberman Pinscher breeds are highly intelligent dogs that require regular mental stimulation and energetic play. They appear fearless, and tend to be observant, which makes them ideal as protective pets for families, and guard dogs. While Dobermans were historically bred as guard dogs but are excellent guardians and family pets due to their alertness and vigilance.

While Dobermans were initially bred for the purpose of security and protection as working dogs, they have since become more family-oriented and less aggressive than before. Today, Doberman Pinschers continue to display a strong temperament, though overall, they are more tolerant while remaining protective of their personal space and the security of family and human companions.

German Pinschers are very similar to Bull Terriers, as they display a stubborn but playful nature. They are intelligent, fast learners, and while they are energetic and expressive, they can be distracted or lose focus if they’re expected to perform guard duties for too long.

With proper training, German Pinschers can improve their ability to focus, though they tend to be impatient, tolerant, and easy to entertain as family pets. As one of the oldest dog breeds in Germany, this Pinscher was initially bred for various working dog tasks, including catching small animals and vermin.

German Pinschers and Doberman Pinschers live similar life spans. Dobermans typically live up to twelve years, which is common with European Doberman and American Doberman breeds, and German Pinschers have a longer lifespan, between twelve and fifteen years. A properly balanced diet and regular exercise are the key to a long and healthy life for this medium to large dog breed.

Both dog breeds are generally healthy, robust dogs, though, like many Dobermans and other dog breeds, hip dysplasia is a condition that may develop. Through a DNA test, Dobermans and German Pinschers can also benefit from regular vet checkups to test for eye conditions, heart health, and Von Willebrand’s Disease. When these types of conditions or diseases are detected early, treatments can prevent further problems and ensure your pet enjoys a long, happy life.

Grooming is relatively easy for German Pinschers and Dobermans, as they have short coats and don’t shed too much. An essential comb or brush with bristles can help reduce shedding and stray hairs from falling and sticking to carpets and furniture.

Bathing and shampooing can be done once a month at the most, though between six and eight weeks is ideal. It’s best not to bathe German Pinschers too often, as their skin can get irritated and dry quickly. It’s also essential to trim your dog’s nails often, which should be done monthly for Doberman and German Pinschers.

Which Dog Breed Is the Best for Your Household?

Both dog breeds make excellent family pets. Historically, both dogs were bred to perform various tasks as working dogs, whether guard or police dogs, though they have since adapted well as family pets. It’s crucial to research your area for reputable breeders to ensure they are licensed and provide a healthy environment, spacious kennels, and proper care.

Whether you’re adopting a Pinscher mix or a purebred Doberman puppy, you’ll find this these dog breeds provide lovely companionship and ideal pets for your family.